Women’s magazine eShe carried a profile about MIRR Investments founder Namrata B Durgan in its June 2018 issue. eShe is a Delhi-based monthly magazine which “looks at the world through ‘the female gaze’, and through the lives of its women, their joys and challenges.”
The magazine’s name is derived from the Hindi word “Ishi” which is another name for Goddess Durga.
The profile on Namrata covered how she was inspired to launch MIRR Investments to help Indian women discover financial freedom. 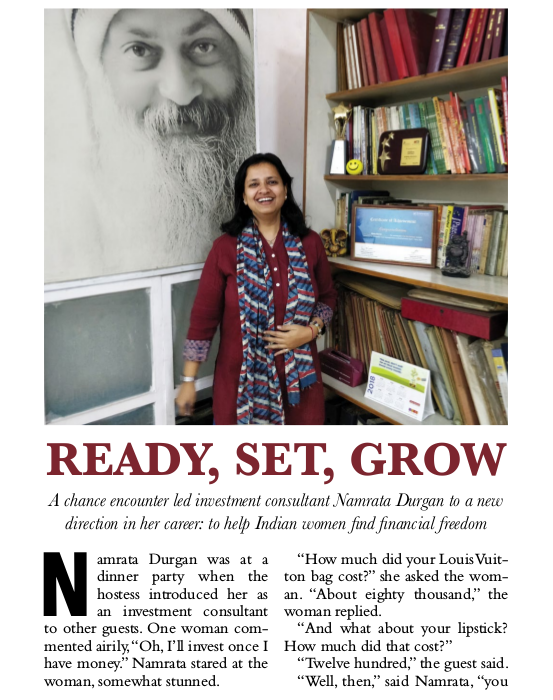 At last, here’s a movie that portrays women taking on the male-dominated world of Wall Street. Equity, directed by Meera Menon, revolves around Naomi Bishop (played by Anna Gunn), a seasoned female investment banker holding her own in the fiercely competitive world of big money.
“For me, I guess the simplest answer is, I like money”, Bishop honestly states when asked what makes her really get up in the morning.

Equity has been getting positive reviews with one critic hailing it as “the she-wolves of Wall Street”.
The fact that there’s never been a female CEO at any of the 22 largest U.S. investment banks says a lot about gender inequality in finance. The irony couldn’t be more obvious at a time when Hilary Clinton has become the first U.S. female presidential nominee.

Equity is not only correcting that imbalance on-screen but also behind the camera. The film’s leading producers are women as are the scriptwriters, while the mostly female-led cast is directed by a young Indian American woman director.

“The film is about women in power and their relationship with money,” Menon said in an interview. “All of these things are newer to explore because they’re not necessarily things that historically women have been associated with.”

As Bishop says in the film, “I am so glad its finally OK for women to talk about success.”
It’s the kind of line that should inspire women worldwide to shatter the glass ceiling once and for all.

The world of finance has traditionally been a male domain but Indian women are smashing through the glass ceiling to emerge as leaders, especially in banking. This management revolution is happening at a time when fintech, or financial technology, is rapidly changing India’s financial ecosystem.

This trend is indeed ground-breaking indicating that India is at par, if not ahead, of many countries when it comes to gender equality in banking.

A report in The Quint suggested that some of the reasons why women have made such an impact include their ability to be natural team players, multi-taskers and flexible managers while adding that “women also traditionally tend to be more careful with money”.

Taking an international view beyond banking, a recent study by the Centre for Financial Research at the University of Cologne indicated how women approach financial management. The study indicated that female fund managers switched around their portfolios less than their male colleagues. An analysis on Investopedia offers further insight on “the unique ways women approach finance”.

With women heading some of India’s top banks coupled with the growing impact of fintech, it should be no surprise if the country is heading for a financial revolution. A recent report by KPMG India titled “Fintech in India” states that “the traditionally cash-driven Indian economy has responded well to the fintech opportunity, primarily triggered by a surge in e-commerce, and smartphone penetration.” The transaction value for the Indian fintech sector is estimated to be approximately US$ 33 billion in 2016 and is projected to reach US$ 73 billion in 2020 growing at a five year CAGR of 22 percent.

With banks targeting the millennial audience – India has the world’s youngest population with over 350 million people below the age of 24 – fintech is expected to play a major role in attracting this crucial demographic. Moreover, with 277 million internet users, India has just overtaken the U.S. to emerge as the world’s second largest internet user after China.

In other words, fintech powered with female leadership can give India a unique standing in the global financial market while giving you, the consumer, better options on how to manage your money.